Posted on February 2, 2013 by Elaine Romanelli

The west coast tour started not so auspiciously, with a ride on a shuttle headed to the wrong airport. (I mean, I *could* have walked back from New Jersey. Eventually.)

But I figured it out before we crossed the river, and all was well, and it was such a beautiful day out my spirits were buoyant. The knowledgeable driver kept a running commentary; there’s Grand Central, there’s the Helmsley building now owned by a dog… it was fun to be a tourist in my own town. (Look! It’s the trolley to Roosevelt island! Quick, get out your cameras!) 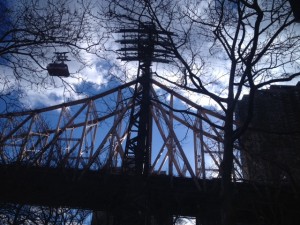 The shuttle driver was so nice that I didn’t even mind when he dropped me at the wrong terminal.

But then this happened: 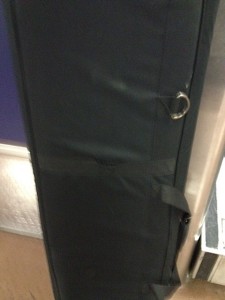 This may be hard to see, but the strip of fabric across the middle used to have backpack straps attached to it. Unfortunately the canvass that held them ripped off.

Problematic. Especially what with the hike to the correct terminal.

But that’s okay! There’s more than one way to make this work!  I jury-rigged the straps to go to another part of the bag. All’s well! 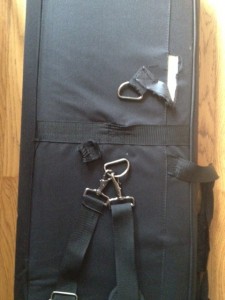 So there was some gripping and griping, and at the waiting room quite a few urgent phone calls looking for replacement keyboard cases that could get to Portland by the next evening. (Got one in the nick of time.)

The whole thing combined to create a travel experience rather more stressful than anticipated.

As a result, once on board, this happened: 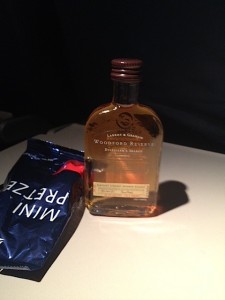 a wee bottle of equilibrium restorer

I fully expected a wing to fall off the plane, or at least a small engine fire, but except for the plane taking off an hour late, nothing else went wrong.

So hurrah, huzzah, thanks be for overnight shipping — and for wee tiny bottles of All’s Well that Ends Well.