Nashville star (for a week)

Posted on December 11, 2012 by Elaine Romanelli

As some of you know, I have had the coolest possible start to the month:

I got flown in to Nashville to record on another artist’s album.

The artist is SONiA, of disappear fear, the album comes in April, worldwide, starting in Europe.  (I know! Right?)

It’s still being finished, so who knows what will end up being what, but I tracked keyboard for two songs, and I sang duet-like backup on almost the entire album. So, in theory, I will be a big part of what you hear when it debuts.

Yes. That would be totally awesome.

The gang making the recording was easygoing and very fun in addition to being quite talented (those things don’t always go together), so we really enjoyed what can be a stressful time, when you’re all in small, dark rooms trying to get the best out of yourselves in a few takes.

I thought I’d spend the entire time in the studio but I got out for an outing or two, including a quick tour of downtown, really good espresso, a meeting at SESAC headquarters (yes! I’m a member now)… 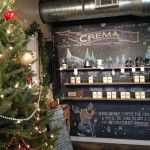 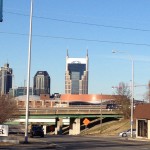 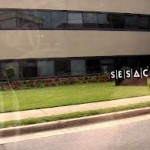 and, let’s see, hmmm…. huh, what else? Oh, oh yes: the Grammy nomination concert. VIP-style; private parking, escorted in the back door, seating in the owner’s box. 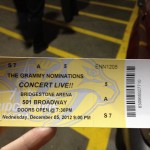 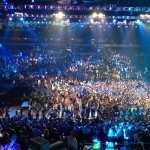 The crowd at the show 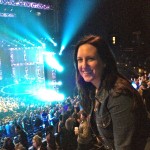 Just a girl in her box seats. Happens all the time.

The studio was terrific – extra thanks to Mark ‘Z’ Zellmer – as was the amazing co-producer/engineer, Mike Poole. And SONiA managed somehow to be the artist, the songwriter, the producer, and continue to be a lovely person, which is no small task. 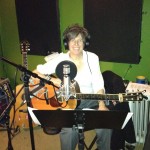 SONiA in the studio 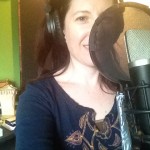 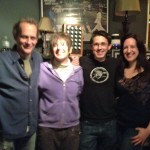 appropriately blurry: the last four, after the last take on the last day

I hugely enjoyed working with both the session musicians and the other Friends of Sonia folks who came in for the project.

I tell you: making music full time is definitely my happy place. Not booking, not searching for new fans, not updating Facebook. Singing, writing, playing with others, playing for others, all day every day. That was the very best part of living the life for a week.

It was wonderful while it lasted.