Posted on December 29, 2012 by Elaine Romanelli

Which honestly did not occur to me, jaded New Yorker that I’ve become.

But we did, and it was so fun!

The only thing is, it turns out – and perhaps you photographers out there have been aware of this for some time? – it’s hard to take good low-light images with a phone camera. From a car. In the rain. So there are not many: 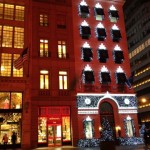 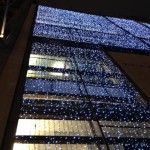 Burberry, all decked out 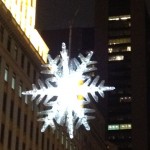 Star dangling over the street

But I did also previously stop by the original Macy’s, in Herald Square, to check out the famed windows: 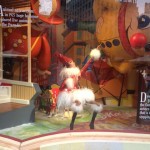 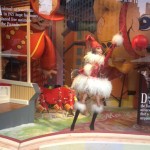 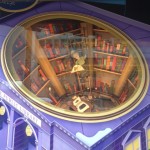 The librarian and ladder move around the ‘room’ 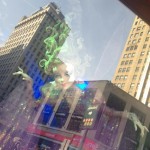 Specter over cityscape. Pretty and creepy.

We would have tried to find some secularized shiny holiday things for other faiths, like a giant twinkling menorah, but Chanukah was already over, and Kwanzaa hadn’t begun. (And Christmas is nowhere near Ramadan, which, let’s face it, isn’t a ‘break out the sequins’ holiday in the first place.)

AAAAANYhoo… just thought those of you living Not Here might appreciate a glimpse of the city in its winter finery. From NYC, with love, to you and yours.
Merry Happy Whatever to you all.

This entry was posted in Travel. Bookmark the permalink.